Patina and the Flooding Ford 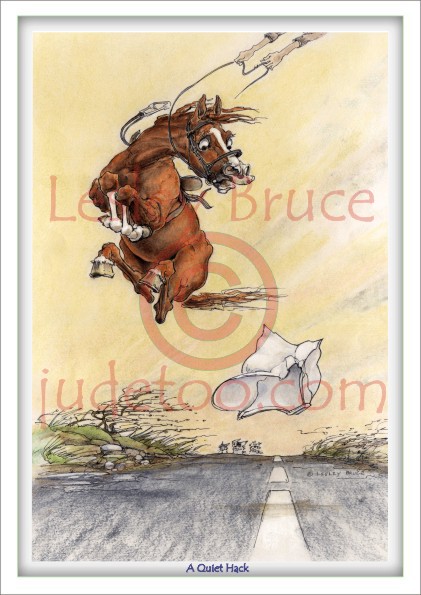 Patina is a magnificent chestnut mare who glints of gold, she is generous will do anything and everything for you always trying her hardest, so, should there be those VICIOUS WHITE BAGS- "STALKING" . She certainly wasn't going to let them Get at You - "BRAVERY" is her middle name, this especially so for she was in truth, shall we say "prudent" well you can't be brave if you aren't scared in the first place can you. - Once upon a time she lost this Bravery. We had just moved to the place Phoebe the Cat called "The First Place" it was a fifties style dormer-bungalow boasting a pathetic and totally inadequate marshy acre of land, My wooden stables had been hastily dismantled then clumsily erected in the back garden "Buster Keaton" fashion, by comedians masquerading as knowledgeable handymen, but that's another story.

The property sat miserable amongst an isolated row of similar bungalows. They bordered a country road, wide enough for 2-way traffic but narrow none the less. It was a shortcut to and from the local industrial estate. This useful bit of information seemed to be in the "Knowledge" of every truck driver in the land. They roared byin angry convoys. To avoid riding on this terrifying road I was thrilled to find an alternative and it was nearly opposite. Patina (or "Teens" as she is known to her friends) and I merrily set out exploring to be immediately crestfallen at finding this little road was blocked by a raging ford in full flood. It looked deep, higher than her belly and thundered by crashing wild over jagged rocks to plunge with frightening
speed beneath the concrete jaws of a footbridge. Contemplating being swept there-under I decided the terrifying road was safer and turned Patina to retrace
our steps, a thing I had ........NEVER DONE BEFORE ...........

The "Road" had one saving grace; it possessed a small pedestrian pavement continuing about a mile and happily it reached the next turn off. The Rain continued for weeks, the ford brimmed, we HAD to ride along That Road. Traffic wasn't a problem, Teens was great in traffic, it was those VICIOUS, PLOTTING "WHITE BAGS" Lurking with intent "DEAMON CRISP PACKETS" and "TRASH GOBLINS ".

Normally, being so brave she coped, for, though fearful of all Bogy Men, if I asked she would venture anywhere. Things began to change, her Fear turned to Terror. She became Alarming - Dangerous. Now I was scared... Her "Terror" list grew to include even our parked car, something was very, very wrong, she'd morphed into an accident waiting to happen.- I Didn't dare take her on "That Road" no - not now. Eventually the rain stopped and the ford became passable, we could go that way.But it was Not so easy for poor Teens, she quaked in fear. Time to ask Nick my man to help, he who never was and never will be "horsy" who looked at their rear ends, said "That's a Big Engine" and stepped well back, loving them from a safe distance. He was sporting a nasty head cold the day I asked him to stand in the ford with a carrot, -- "Nick, Nick! Come out it's not safe" -- implored Patina, the carrot useless. Encouragingly, I said, "You only have stand there until she sees that nothing happens to you --- She won't take too long.

"Hmmmm .... "She obviously doesn't know then, that I could "HAPPEN" to catch pneumonia." Nick looked bleak.

."NICK!!"....., Patina, fraught for his safety was fidgeting and ready to flee. "Oh! Teens ..COME ON JUST DO IT” Resolute, I took charge and strongly rode at the ford taking absolutely no nonsense. Eyes tight shut she launched herself madly across. . Gasp! ...We were on the other side. Grateful, I turned to the now dripping Nick saying, "Thanks for that, you can go now, you'll catch your death in that ford."

The moral - the instant I'd taken charge I got my old Teens back, because she got her old me back. That fateful day when I did... "the thing I'd never done before" in turning her away from the ford she'd lost her confidence, her protector must be SCARED ....

All she needed was for me to be my normal fearless self and she'd be right by my side BACK TO HER OLD BRAVE SELF.

Worming How to do your own egg counts

yoga help for riders with pain in hip and leg

Patina and the Flooding Ford